Getting Better All The Time: The Benefits of Learning for Decarbonisation 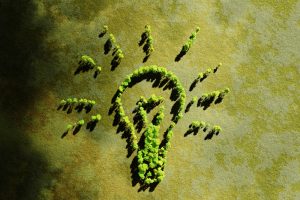 The technological development will dramatically impact decarbonisation cost. In this blog post, the author suggests that national decarbonisation strategies should put a special emphasis on the benefits of learning.

Technological improvements are seen as a physical law that will substantially contribute to reducing the cost of global decarbonisation efforts. Hence, the expected learning rates built into models that assess the cost of decarbonisation are substantial. The climate strategy proposed by the European Commission assumes, for example, that the cost of solar photovoltaics will fall by 36% and the cost of wind turbines will fall by 27% between 2020 and 2050. The good news is,  these forecasts are rather conservative compared to the observed cost reductions in the past decade. According to the International Renewable Energy Agency (2018) cost of solar power generation fell by 70% between 2010 and 2017 while onshore wind projects installation cost fell by 19% between 2010 and 2016.

The technological development will dramatically impact decarbonisation cost. Research in the framework of the COP21 RIPPLES project shows that a 50% lower learning rate for wind and solar technology alone would induce a 19% increase in total decarbonisation cost. On the other hand, a 50% higher learning rate could reduce energy system cost by 17%.

Learning-by-doing was seen as a key driver of the reduction of technology cost in the past. Research in the framework of the COP21Ripples project indicates that technology cost developments for certain technologies can be relatively accurately predicted based on the rate of their deployment. In a scenario with a 30% increase in annual deployment, the cost of new installations drop by 17% for solar and 13% for wind compared to a medium deployment scenario (10% annual growth).

Keeping global temperature increase below 2°C will require an almost complete decarbonisation of our energy system in the foreseeable future (early in the second half of this century). There will therefore be a growing market for all sorts of low-carbon technologies (vehicles, power plants, appliances, batteries…) that will replace the existing stock of high-carbon technologies. Policies to develop and deploy corresponding technologies might not only speed up the necessary learning but also enable the development of comparative advantages. These advantages typically develop in industrial clusters and not all regions have the potential to excel in all low carbon technologies. Hence, it might be sensible for regional and national policymakers to make educated guesses on what type of support might fall on the most fertile ground in their jurisdiction. Regions with a strong car industry might, for example, benefit more from aggressive low-carbon vehicle deployment programs, while regions with a successful semiconductor industry might benefit more from public support for research in photovoltaics.

Support policies for specific low-carbon technologies will only deliver if the addressed stakeholders actually shift their activities accordingly. Thus, policies should be clearly targeted at the specific national innovation system. For example, a case study conducted for the COP21 RIPPLES project in Brazil highlighted a relatively positive experience with well-designed local content provisions for the wind industry. Given Brazil’s significant market size as well as the pre-existing technological capabilities, they seem to have contributed to the development of a local wind industry.

By contrast, the full potential of the solar thermal energy industry in South Africa has not yet been exploited as it was not possible to involve relevant stakeholders – especially the national electricity company – into this process.

Hence, national decarbonisation strategies should put a special emphasis on the benefits of learning.

Originally published by Bruegel on 16 April 2019.

Georg Zachmann is Senior Fellow on Energy and Climate at Bruegel